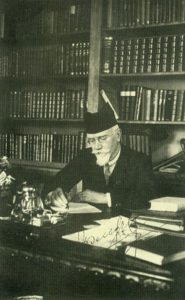 The most prominent Greek statesman was a realist and a visionary, intelligent, flexible and daring, possessing an impressive personal charm.
He was born in Ottoman ruled Crete in 1864. During his childhood years his family fled to Greece in consequence of his father’s involvement in the Cretan insurrection of 1866. Following his graduation from the Law Faculty of Athens University he worked as a lawyer in Chania but soon he entered politics as a member of the liberal party of the island.
His political and leadership qualities were revealed during the revolution of 1897. During the period of Cretan State (1898-1912) Venizelos was actively involved in the drafting of the Cretan Constitution. He quarreled with the High Commissioner Prince George on account of his liberal principles, he resorted to an armed rising at Therisso (1905) and secured the replacement of Prince George by the Greek politician Alexandros Zaimis. During his subsequent efforts for the unification of Crete with Greece Venizelos kept a skillful balance between daring and moderation.
In 1910 he moved to mainland Greece, where he became Prime Minister and founded the “Liberal Party”. He was the moving spirit in the political and economic progress of Greece and in the victorious outcome of the Balkan Wars (1912-1913). Greece was redoubled in size and population.
During World War I he clashed with the Crown and at the expense of the National Schism (1915-1917) he imposed his pro-Entente policy. Greece was rewarded for the contribution to the war by being given the High Commissionership of Smyrna (1919). He signed the Treaty of Sevres (August 1920) by which “Greece of two continents and five seas” was created. In the vital elections of November 1920 Venizelos was defeated and he withdrew from politics to return after the Asia Minor disaster of 1922. With two of his radical initiatives (1923) – the mandatory exchange of Greek and Turkish populations and the Treaty of Lausanne which defined the boundaries between Greece and Turkey – he changed the orientation of Greek foreign policy and laid the foundations for peaceful development.
His last term of office as Prime Minister (1928-1932) was a period of stability and creativity. The end of his career was marked by the attempt against his life (June 1933) and the failed venizelist coup of March 1935. He went into self-exile in Paris where he died on the 18th March 1936.

Next page
Skip to content
We use cookies to ensure that we give you the best experience on our website. If you continue to use this site we will assume that you are happy with it.Accept